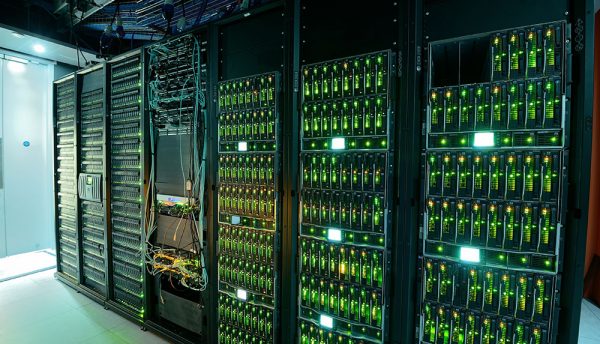 As the largest genomic research data centre in Europe, the Wellcome Sanger Institute is one of the world’s leading research facilities focused on genomic discovery.

Based at the Wellcome Genome Campus, Cambridge and established in 1993, the institute conducts key research into improving the outcomes of human health using data derived from genomic sequencing, particularly in the areas of cancer, malaria and other pathogens. It also works closely with a wide range of collaborators – both internationally and across the campus – to share the results of its research with the wider scientific community.

At the core of Sanger’s technical infrastructure are its DNA sequencing machines; a fleet of complex and advanced scientific instruments which generate vast quantities of data that must then be analysed within its on-premise data centre.

The nature of genomic research, a cutting-edge and evolving area of science, means that the demand for data-processing capacity is only likely to increase over time – genomic data is soon set to become the biggest source of data on the planet.

In fact, as much genomic data has been produced in the last 18 months as the previous 18 years, but as an organisation concerned primarily with science, budgets for supporting infrastructure, including IT, will always be under pressure.

Simon Binley, Data Centre Manager at Sanger, said: “It’s hard to predict what level of data centre capacity we’ll need over the next five to 10 years, but all the trends point towards the requirement for greater IT capability; the more processing power you have the greater the scientific capability. Every year, the sequencers generate data more quickly as the technology improves. IT has to keep up with that demand.”

By way of illustration of the pace of change, as part of an international effort, Sanger took 13 years to map the first human genome. Today, the same task can be achieved in less than an hour.

“The human body is made up of trillions of cells,” said Binley. “As we sequence those cells we will also be gathering more genomic data via a greater number of sequencing machines. Advances in today’s technology also mean we are gathering data more quickly than ever before. This requires more power availability, greater storage, faster connectivity and higher levels of local compute.”

This requirement for local processing to be physically close to the sequencing equipment where data is being generated is an archetypal example of an ‘Edge Computing’ deployment. “Proximity to the sequencing equipment is a primary consideration for the data centre,” said Binley. “The bandwidth and latency requirements for the high volume and velocity of genomic data makes cloud services unsuitable. As such, no other Edge data centre is as important to discoveries about human life as the one at Sanger.”

Another key considerisation is the DNA sequencing equipment on which the scientific effort depends, which must be protected by uninterruptible power supply (UPS) systems at all times. Downtime within this distributed IT environment would require the chemicals used in the research process to be replaced at significant cost, in addition to lost time and data. Ongoing monitoring of UPS battery health is therefore essential to ensure runtime is available and makes a major contribution towards the Wellcome Sanger Institute avoiding outages in both the data sequencing and research efforts.

Operational efficiency is the remaining key concern for Binley and the data centre. Any money saved on IT and physical infrastructure, either in terms of capital expenditure (CapEx) or operating costs, means greater funding is available for key scientific research. Cooling is a major point of focus when addressing operating efficiency.

Solution – An upgrade delivered via partnership

As part of its ongoing demand for greater processing power, Sanger made operational a fourth data hall within its existing data centre facility. Comprising more than 400 racks and consuming 4MW of power, the institute is now the largest genomic research data centre in Europe.

Additionally, the DNA sequencing equipment on which the scientific effort depends are protected by individual APC by Schneider Electric Smart-UPS uninterruptible power supply (UPS) systems. Ensuring resiliency within this distributed IT environment is essential, ensuring that the institute avoids outages and any losses of sequencing or research data.

As part of the upgrade, Sanger worked directly with EfficiencyIT (EiT), a specialist in data centre design and build, and UK Elite Partner to Schneider Electric. Having worked closely with the institute for years, while forming a long-term, strategic partnership with Schneider Electric, EiT were able to recommend the best course of action in terms of monitoring for this data-driven and distributed IT environment, ensuring that its scientific research would continue without interruption from downtime or from unexpected outages.

EiT specified Schneider Electric EcoStruxure IT Expert; a cloud-based Data Centre Infrastructure Management (DCIM) software platform, which enables the user to manage all of the key infrastructure assets and improve the overall efficiency of the data centre.

“Partnership is absolutely crucial for today’s data centre environments,” said Nick Ewing, Managing Director, EiT. “By listening closely to the Wellcome Sanger Institutes’s challenges and understanding the paramount importance of its work, we were able to recommend the most cost-effective and innovative solution to support its business objectives. As such, it selected EcoStruxure, which gives it greater visibility into the IT and power infrastructure, while ensuring it can drive both operational and energy efficiency.”

EcoStruxure IT Expert is highly scalable and quick to deploy and install, allowing thousands of devices to be connected and discovered in less than 30 minutes. The software is completely vendor-neutral, allowing the user to manage all of the critical infrastructure assets on their network within a single solution, leveraging data analytics that enable smarter real-time decision making and ensure that any unexpected issues are identified and quickly resolved.

The platform, where data from assets is stored, pooled and analysed, is highly cybersecure and GDPR-compliant, allowing users to view all of their assets at any time, from anywhere and on any device. Additionally, security, software and patch updates are automatically issued via the Schneider Electric Cloud, which is hosted on Microsoft Azure to ensure customer information is kept safe and secure.

Previously, the Sanger facility had not utilised a unified management platform for its hardware assets. Such systems as were in place had grown organically as the data centre grew. According to Simon Binley: “It was perhaps natural that the focus was on the IT equipment housed within the data centre and not necessarily on the power train. The EcoStruxure solution unifies those two important data centre elements, giving us greater visibility of the entire estate.”

EcoStruxure IT Expert replaces that disjointed system with a single management console that allows a much more comprehensive and integrated view of the operation of the entire facility.

“Visibility of power utilisation and assets throughout the data centre is the first step to build a complete understanding of what the facility looks like,” said Binley. “From that, we can make an informed decision on how to make it more efficient. Having the ability to see and manage more than 400 racks of critical IT equipment, and all the components contained within each, gives us a significant advantage and enables a massive improvement to the operation of the data centre.”

EcoStruxure IT Expert was chosen, says Binley, because it was considered best-in-class for the institute’s requirements after examining several competing products. It was well suited to the existing infrastructure in the data centre. Because of its standards-based open-platform architecture, it can simply and easily integrate with hardware from other vendors.

As well as improving the operation of the data centre itself, EcoStruxure IT’s management capabilities can also be extended to other distributed assets throughout the institute and the broader Wellcome Genome Campus, including its sequencers. Several other communications equipment rooms distributed throughout the campus are also made visible within EcoStruxure IT’s single pane of glass.

Another benefit of EcoStruxure IT is its cloud-based architecture which enables the institute to outsource some of its critical IT requirement to third-party colocation providers and still manage the infrastructure internally. The solution provides the institute with complete visibility of IT health, ensuring that both the data centre manager and any accompanying maintenance or service providers such as EiT, are instantly notified via email and the EcoStruxure IT Expert smartphone application should a power outage occur. In this way, it allows all key stakeholders to have visibility while enabling rapid collaboration to help quickly resolve critical IT issues.

The payback for installing EcoStruxure IT will be seen through reduced operating costs, especially in terms of a reduction in energy consumption. “From a power and energy perspective, we expect to save between 5-10% over the first two years in the data centre itself,” said Binley. “We can do that by raising the room temperature in the data halls, currently set at 19C to 21C. For a 4MW facility, that represents a significant cost saving thanks to a reduced cooling effort required, and as the product matures, we would look to increase that even further.”

The institute has ambitious targets for improving the Power Usage Effectiveness (PUE) rating for the data centre from between 1.6 and 1.8 where it is now, to around 1.4, which will yield even further cost savings. “Any improvement in PUE and energy efficiency automatically reduces electrical spend and allows us to repurpose investment into other areas,” said Binley. “That means more equipment, more scientists and more benefit to humanity, which is the primary focus for the Wellcome Sanger Institute.”